When I read this from Austin 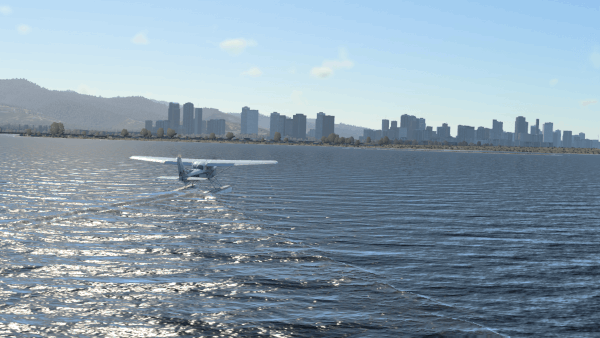 With our new 3-D water, the 3-D water RENDERING is exactly in sync with the 3-D water MATH, so our floats now interact fully with 3-D waves. Momentum-transfer, shear-friction, water-displacement at speed to clear the floats aft of the step, water rudders… we’ve got it all. Get i the 172 with floats, set the water waves to 2 feet high, and hit command-m a few times to see the forces…. you’ll see what’s involved here! With our Cessna 172 seaplane and new Robinson R-22 helicopter with floats (the “Mariner”), we get really excellent water interactions now. Fly both the 172 and the R-22 a bit on the water with some waves and you will really notice something: The Skyhawk MUST have VERY CAREFULLY shaped floats, very carefully operated to fly, because flight speed MUST BE OBTAINED on the floats! But the R-22? Meh. Couple of pieces of styrofoam would be fine. You just have to float since you operate vertically out of the water. Try both airplanes a bit in the sim now, with some good waves set: You’ll see what I mean.

Now, we took those water dynamics to a pretty darn high level for seaplane training! We’ve got some professional seaplane pilots on the internal test team and they are really helping me get it all dialed in. So here’s how seaplanes work: (Again, everything I am about to explain is how REAL seaplanes work, and is ALSO simulated in X-Plane 12: This discussion applies to both X-Plane and reality).

At zero speed, the floats work by simply displacing water… same as any stopped boat. The plane bobs in the waves like a cork. You already knew that. But here’s where things get interesting: Thanks to all the friction with the water, idle taxi speeds are on the order of ONE KNOT thanks to all the drag on those floats… and once you start building up some speed, the FRICTION between the floats and the water start getting really bad. In fact, in plenty of airplanes, if you’re holding the stick full aft to really keep your prop up high, the entire float will be in contact with the water, all dragging along and making huge waves… and you might not be able to exceed 20 knots! At full power! This is called PLOWING. The wave drag from the huge floats and friction with all that water is just too much. Remember, water is 800 times denser than air… 800 times!

Your floats are dragged to a standstill by the heavy water, but your prop has only the AIR to work with, at 1/800th the density of what the floats are in. That’s an uphill battle for the prop, so we need to find a way to cheat. And here’s what it is: It’s called the STEP. The STEP is a sudden step in the float, about halfway back, where the float surface suddenly recedes from the water. So for a take-off, once you get a bit of speed up, the water is willing to SEPARATE from the float at that step. Now that you have a little bit of speed and the water is separating from the float at the step, push the stick FORWARDS. Get the BACK of the float up OUT of the water. Now, only HALF the float is touching the water! Your friction area just got cut in half! At this point, you might be running 25 or 30 knots, airplane deck-angle level, the stick NOT held aft, the water separated from the float at the step, and the back half of the float held out of the water by the level (not nose-up!) attitude of the airplane. You are now running on the step, with only half your float even touching the water.

Now, as your speed builds, more of the floats come up out of the water. Soon, you are just water-skiing on the step, no wave drag since you are ON TOP of the water, not IN IT, and little friction drag, because little of the float is even touching the water! With the drag from the water on the floats now hugely reduced, you are basically running a self-propelled water ski, and any waves in the water are going to start to feel pretty “hard”. No more cork bobbing in the waves, water now has to be shoved aside at one THOUSAND kilograms per cubic meter (well over one TON per cubic yard!), and at 40 or 50 knots you are shoving that mass aside FAST. THIS is why the water seems so “hard” at this speed: Dipping even a few inches into it would displace thousands of pounds of water per second. If the floats can handle the waves, though, then this hard water is good for you, as it really pushes the floats up to the surface, minimizing the amount of the float that is IN the water, accruing friction drag.

So that’s the takeoff. 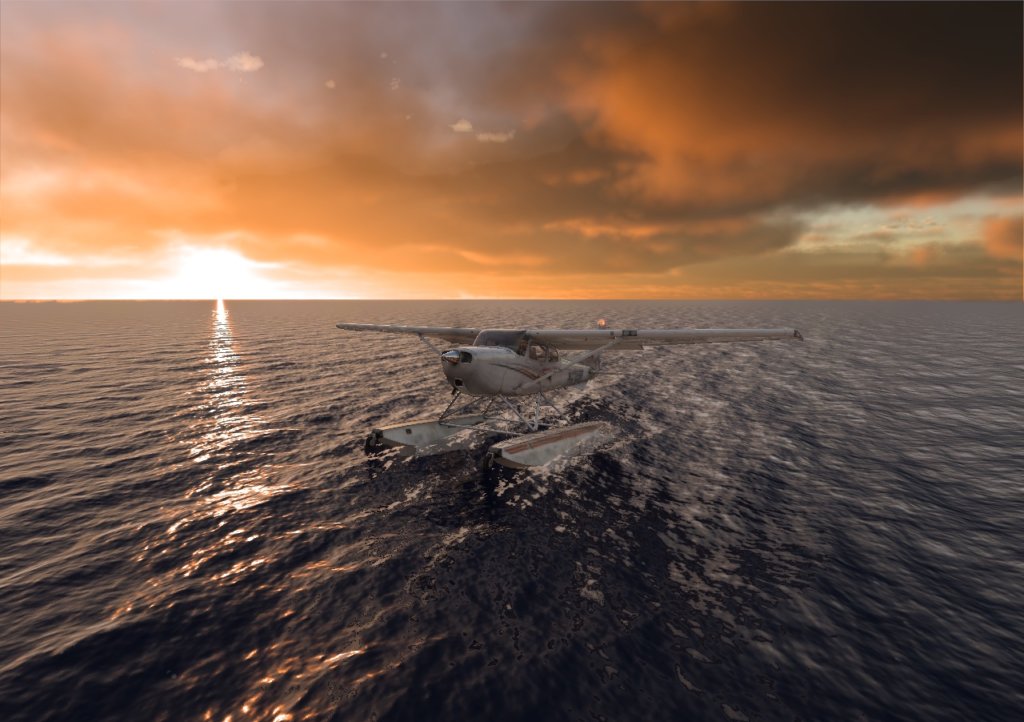 On the way back down for landing, the reverse, but a few notes: A slower touchdown is good, touching the back of the floats first, for directional stability. Don’t touch the FRONT of the floats to the water: They may pull the plane to the side since your contact patch might be a bit forward of the center of gravity, and the drag might cause the plane to want to go nose-down a bit more than you may be comfortable with. So touch down slow, back half of the float down and grabbing water to trail behind you and keep you straight.. don’t worry about the high drag from burying your float: Slowing down is the whole thing about landing. The plane should slow down quick enough with all that friction from large contact area of the float with the water, and soon the water is not hard from skipping along it like a skipping stone, and you slow to the point you are bobbing in the waves like a cork again.

NOTE: GLASSY water is where there are no waves at all, the water is totally flat and smooth. This is HARDER to takeoff in, because waves are really convenient to break that water away from the float at the step! In perfectly smooth water, the water tends to stay STUCK to the float, making it harder to to get that water unstuck from the float at the step, and frankly anywhere else on the float. Your secret weapon here is to literally raise a SINGLE float up out of the water to cut your drag in half and accelerate more. This takes full aileron, and however much opposite rudder you need to run straight.

OK that was airplanes, which is great, but for fun we threw in a Robinson R-22 helicopter with floats as well! It’s called the “Mariner”, which may be a little bit of an aggressive name, because that machine is not super comfortable or maneuverable on the water: The floats have none of the careful shaping or step or anything else that the seaplane floats have: They’re just a pair of big old inner-tube balloons that will keep you from sinking… unless popped or something. Darn sharks! They don’t look good for more than 5 knots or so, so all your helo operations on the water in the R-22 will be vertical only… no running takeoffs or landings or anything like that.

Now I have to say that I’ve been doing a lot of seaplane flying in X-Plane 12, and it’s just plain fun. I always set a lot of waves and a high weight on the airplane, and then try to operate out of tight spots.

I think to this old lady 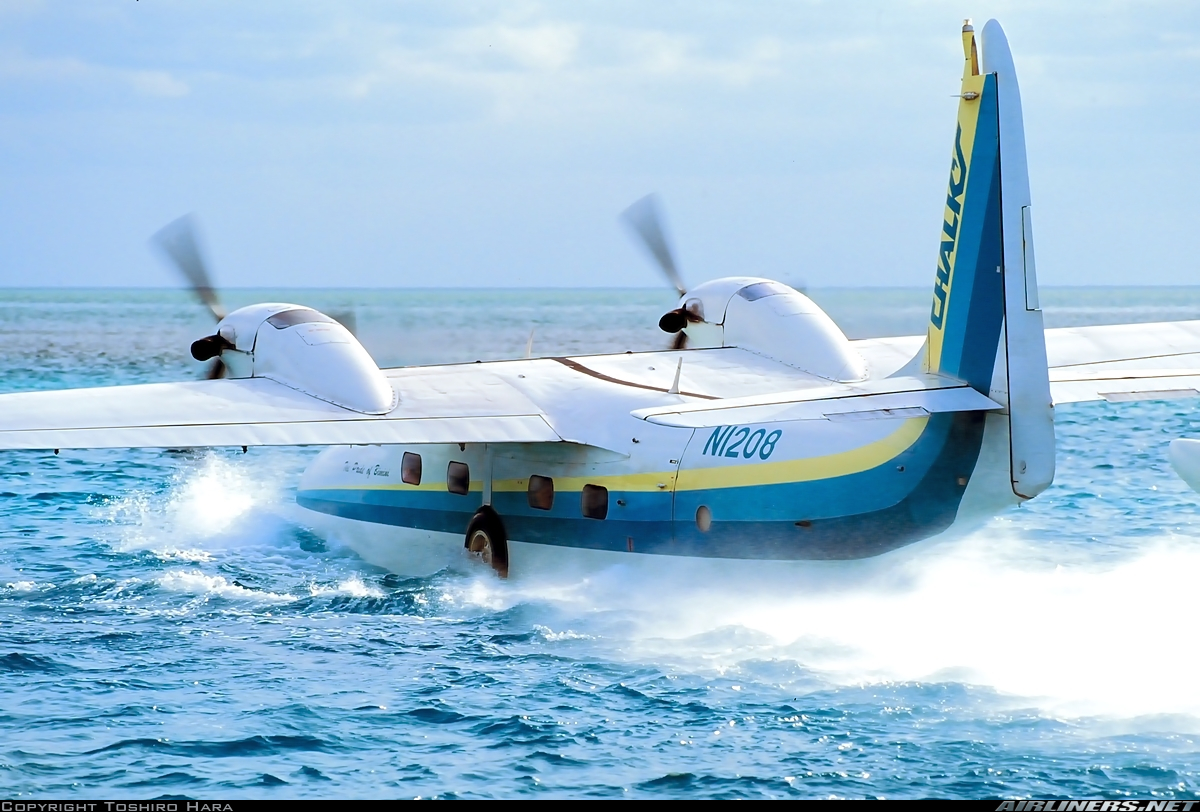 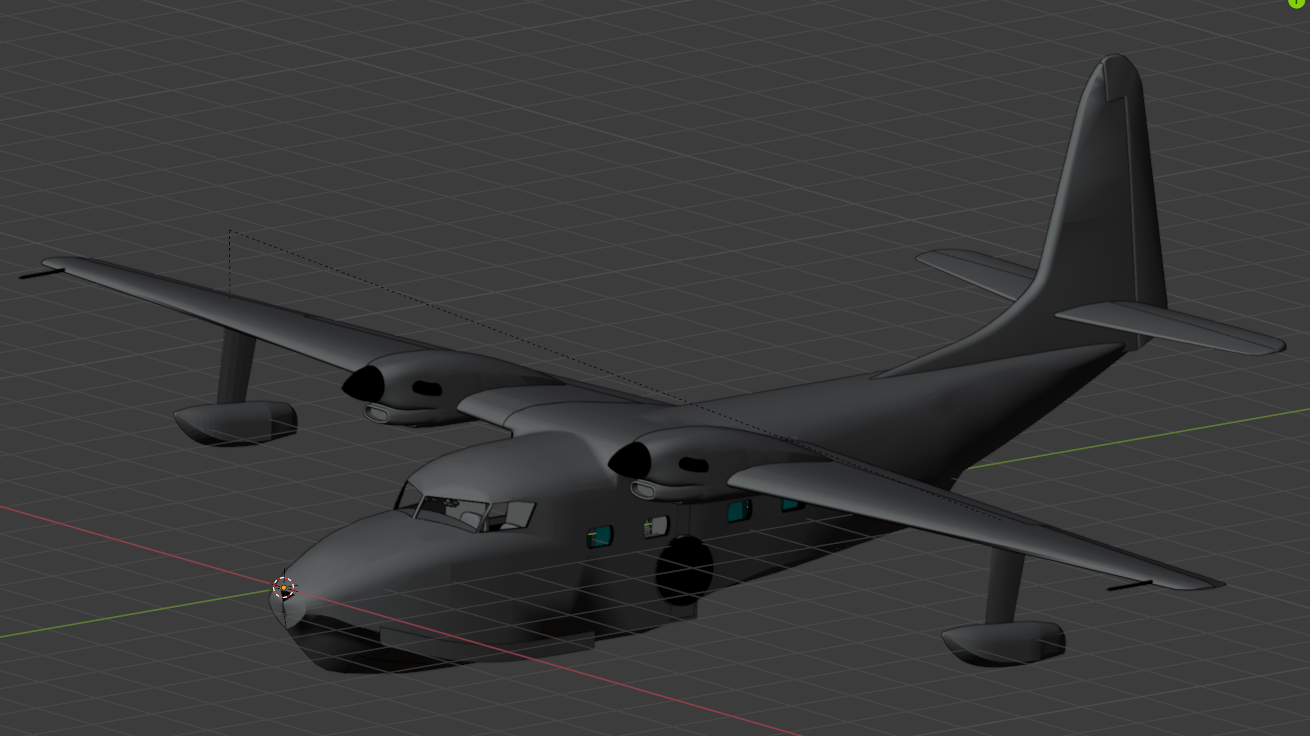